Can You Use InDesign on a Macbook Air? 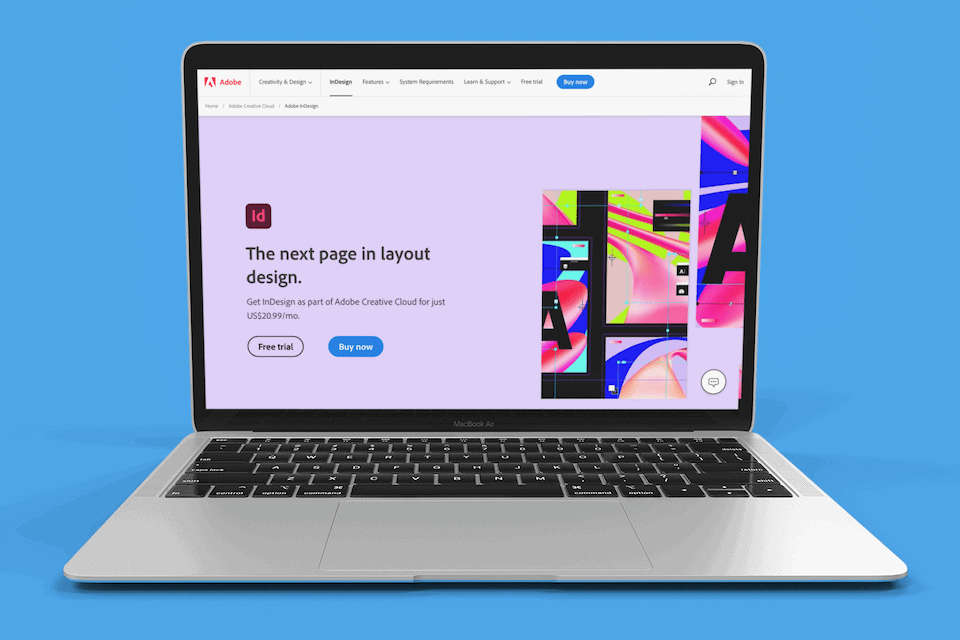 Adobe InDesign is a powerful graphic design tool. If you have a Macbook Air as a laptop and want to use Adobe InDesign on it, you might wonder – can a MacBook Air run Adobe Illustrator? Is the device powerful enough to use the software smoothly?

All MacBook Air models can run Adobe InDesign, however 2020 or newer MacBook Air models will perform best due to their more powerful M1 processor chip. For the best performance, consider upgrading the built-in Memory from 8GB to 16GB.

If you want to learn more about using Adobe InDesign on the Macbook Air, you’ve come to the right place. Read on to learn more about how this program works on the Air, which Macbook is best for InDesign, and more. There’s a lot to cover, so let’s get going!

How Does InDesign Work on a Macbook Air?

To get Adobe InDesign on your Macbook Air, you should:

Now, you can take advantage of all that Adobe InDesign offers.

It might take a moment for Adobe InDesign to boot up, but once it does, you should have no trouble working with the program on your Macbook Air. The laptop can handle the program – but is the Macbook Air the best for InDesign?

Which MacBook is Best for InDesign?

There are tons of Apple products on the market and many Macbook choices. The Air is just one of many. With so many options, is the Macbook Air the best selection for InDesign? What other choices do you have?

Although InDesign will run on any year MacBook Air, the 2020 or newer MacBook Air models are best to run InDesign because they come with the M1 processor chip.

The M1 processor chip is a lot faster than the previous processors, so you’ll have a more enjoyable experience using InDesign.

If you plan to use Adobe InDesign more frequently, you may want to consider upgrading the 8GB of built-in Memory to 16GB.

Although the MacBook Air is less powerful than the MacBook Pro, it’s also less expensive by hundreds of dollars. The MacBook Air is a solid option if you want to make Adobe InDesign a part of your life, especially if you’re buying a 2020 or newer model with the M1 chip.

A 2020 or newer MacBook Air will perform nearly identical to the MacBook Pro when it comes to running Adobe InDesign.

It is not necessary to upgrade computers from MacBook Air to MacBook Pro in regards to using Adobe InDesign.

Do Professionals Use MacBook Airs for InDesign?

In the past, professionals were more likely to opt for the MacBook Pro because it was more powerful, however the 2020 and newer models of the MacBook Air harness the same M1 processor chip that makes it just as powerful.

Is InDesign Free on the MacBook Air?

Free software would be nice, but Adobe InDesign is a complex software that comes at a premium. Before you get started, you need to enroll in a subscription plan for the software. Let’s talk about your options if you need the InDesign software.

If you want Adobe InDesign, you have three subscriptions options to select from:

You can determine which subscription choice is the best for your life and work from there.

It’s vital to determine if you can afford Adobe InDesign before putting money into the investment. At $20 a month, you can expect to pay almost $250 a year for the software. Unless you’re getting a return on that investment, it’s not worth it unless you have a significant sum of money under your belt. The choice is yours.

Are There InDesign Alternatives for the Macbook Air?

Adobe InDesign is a great graphic design software, but it might not be the best option for your needs. If this is the case for you, you might wonder – are there any alternatives to Adobe InDesign that are more practical for the average person? Let’s discuss some of the best secondary choices available on the Macbook Air.

Some of the best alternatives for InDesign on the Macbook Air include the following:

These will give you similar abilities at a different price point.

Many of these options provide price points that are cheaper than investing in InDesign for your Macbook Air. You can test each one out and determine which service is best for you. If none have the same appeal as Adobe InDesign, you can always go back to the original.

If you have a Macbook Air and want to know if it can handle Adobe InDesign, you can feel comfortable knowing the device is capable of it. You can take your Macbook Air with you and feel confident that you will be able to use Adobe InDesign, no matter where you might be.

If you find yourself needing a less resource-heavy editing software, consider online image editors like Placeit.net. They are hosted on the internet so they require very little resources, and can even be used on a smartphone or tablet if needed.